On our departure this morning from Cairns, we were welcomed aboard by our cabin crew in “native costume” for the barrier reef:

The 7 ½ hour flight went by fast for me since I had to lecture on “Angkor: Cosmogony and Cosmology in Stone.” I think it went well. (The next day, local guides confirmed much that I had to say but lacked the larger perspective on India-derived religion that I offered.)

Late in the afternoon, we descended into Siem Reap, the gateway to Angkor. Out the window of the plane, you could see the vast lake of Tonlé Sap 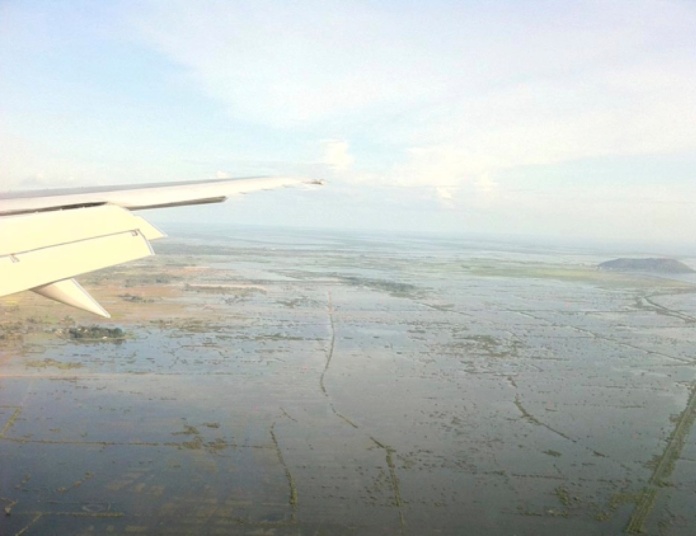 Water defines the Angkor region, with some scholars arguing that the great empires here—with wealth enough to build the mammoth Angkor complex—are a result of the need for centralized planning and control of water resources, which, while abundant, can range from flood to draught throughout the year.

This morning, we were up and out at 5:15 to witness the sunrise, along with hundreds of other people, at Angkor Wat. Approaching the temple via the Naga (serpent) causeway I caught this picture at a moment when the crowds seemed to thin.

And this one of the temple reflected in its moat:

There really wasn’t much sunrise, but the morning was fascinating: Dara 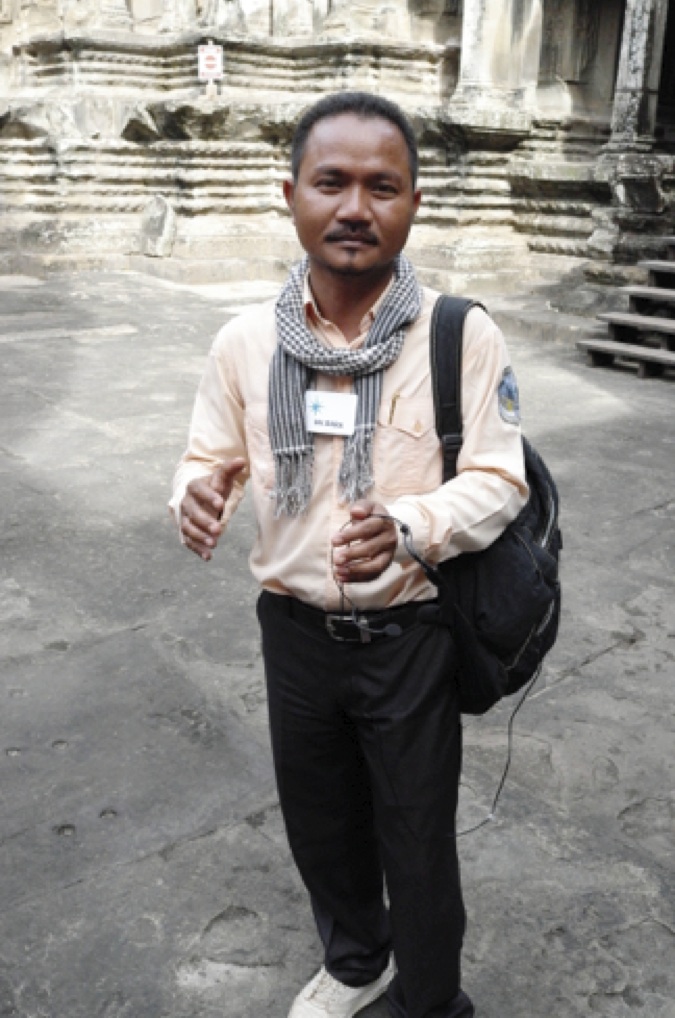 guided us through a complete tour of the temple compound, including many of the galleries on which I had just lectured.

The quality of this carving is impressive. This is a panel dealing with the victory of Rama’s monkey ally, Hanuman, over one of the men of the demon Ravana: 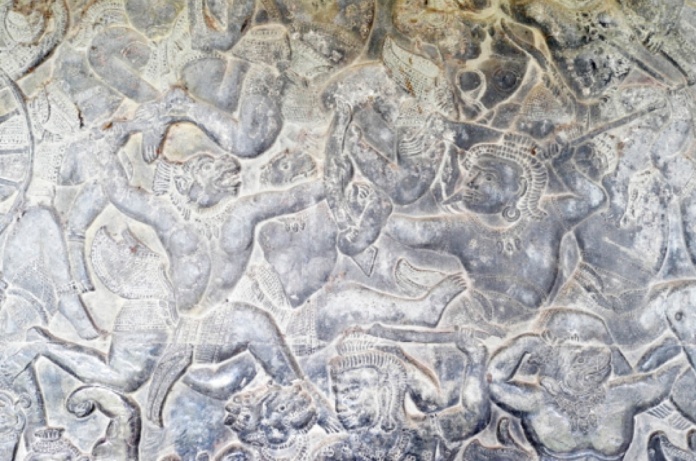 Everywhere through the temple, there are apsaras, celestial dancers. There are said to be 1,500 in all, many with distinctive hairstyles.

We climbed to the highest level, just beneath the central tower (representing Mt. Meru, the axis mundi)

and then re-descended to walk the large southern and eastern galleries. The key bas-relief, on which I had just lectured, is the vast depiction of the gods and demons using the serpent Vasuki to churn the milky ocean in order to recover the elixir of immortality. You can see the serpent stretching out across the gallery.

And here at the center, an apsara over his head, is Vishnu standing on his turtle avatar, directing this cosmogonic/cosmological event.

This bas relief is crucial to the meaning of Angkor Wat, which, as a mausoleum for King Suryavarman II, represents his effort to ally himself with Vishnu’s role as the sustainer of the ordered universe.

Late in the morning, as the sun turned Angkor into a steam bath, we returned to our hotel, the exquisite Raffles (the best hotel so far, I think, on a trip of great hotels), and I was able to cool off in the hotel’s immense pool. 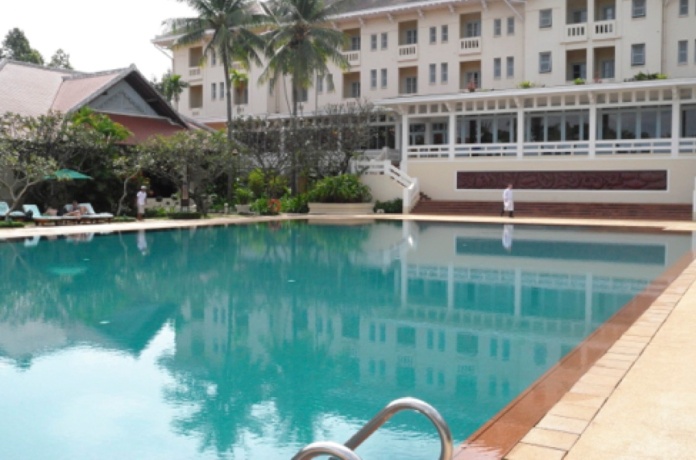 The afternoon was devoted to a special event: a cooking course offered by Raffles’ culinary department. This is the second such course I’ve taken (the first, a full day course, was a birthday present to me from Mary Jean some years ago when we were staying at the Oriental Hotel in Bangkok. I still treasure my gilded, framed certificate from that, which hangs on the wall of our Norwich kitchen.)

Although brief, only 2 ½ hours, this course rivaled the Oriental’s. After an introduction from the head chef, an Aussie, I think, we were divided into two groups and led by two Cambodian sous chefs.

In all, we prepared five courses: a green mango salad (see above for the start; a very good salad), a sweet and sour tamarind flavored soup, spicy chicken in a coconut milk curry,

a stir fried Chinese-style beef dish, and stir fried Cambodian kale (almost a cross between bok choy and broccolini). Here I am looking silly in my toque:

The finale of the course was special: a coconut-milk-custard-filled pumpkin. We didn’t do it ourselves, but watched one of the chefs, a cheerful woman, go through  the steps (the last of which is steaming the custard filled pumpkin for an hour). 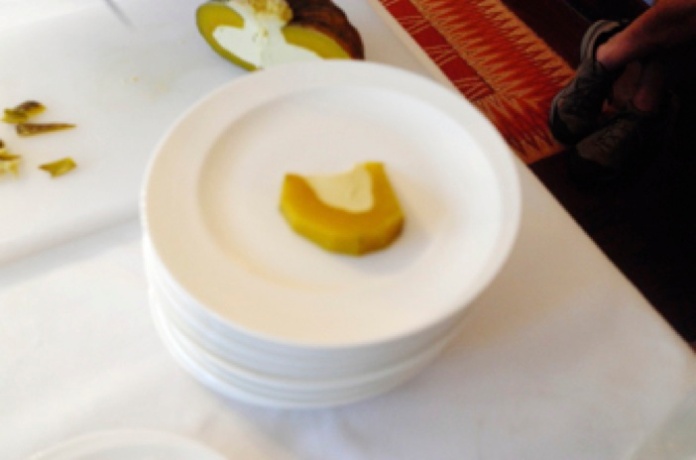 Once I find just the right pumpkin, I’m going to try this at home for Thanksgiving. It tastes as good as it looks.