Today was a travel day—a L  O  N  G travel day, 11 hours in the plane, and the crossing of the international dateline.

We were greeted on boarding by our wonderful team of flight attendants, all decked out in Easter Island headdresses. These girls (here Margrét Rós Gunnarsdóttir) and guys always make an effort to pick up some indigenous clothing for this moment (in Lima it was serapes). 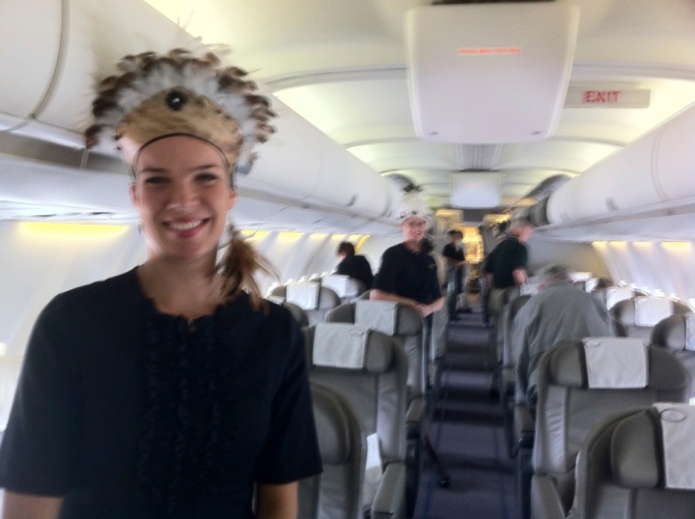 There was ample time for our two lecturers, Fred Diehl and Alan Mann to give their lectures, Fred on coral reefs, and Alan on the Polynesians as seafaring navigators. As we’ll see, both lectures helped illuminate our brief stay in Samoa.

A short 45-minute stop for fuel in beautiful Tahiti (Papeete) permitted this photo of the island’s coral barrier reefs (the white fringes mark them).

The Pacific is huge. For those of us have crossed the Atlantic, or have come to Asia over the northern circle route, it is a new experience to spend 10 hours over blue water. Imagine the experience of the Polynesians who crossed this for days and months on end in a twin-hull dugout canoe carrying whole families with their plants, dogs and pigs. Somewhere in the middle of this, my neighbors shouted “atoll,” “atoll” and I was able to capture this poor photo of a tiny, uninhabited island, alone in the midst of this vast, beautiful sea. 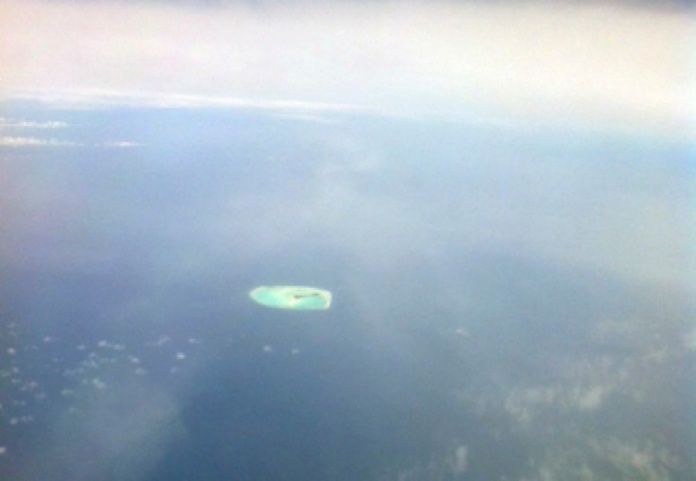 An hour or so out of Tahiti, the pilot made an announcement: “We will be approaching the International Dateline in one minute.” Then, as the moment neared, the cabin crew began to countdown. Suddenly the plane soared upward and then downward, giving us an instant of weightlessness as we went over an imaginary bump in the sky. Hilarious! I don’t think they do that on JAL. (One traveler in the bathroom who apparently missed the announcement later reported that she was “worried.”)

Our descent into Samoa took us across the island’s aquamarine colored coral reefs. Having been instructed to do so, after landing we replied to the many “Talofa”s (hellos) from the very friendly airport people with our own “Talofa.” Receiving our leis (what a shame you can’t bring these home), we transferred to the hotel, greeted there by a native band and a dancing local warrior who kept thrusting his spear at us.

It was well past midnight Easter Island time for us, so after watching the sunset with a glass of wine on the hotel terrace, I went to bed, sleeping nearly nine Samoan hours but still able to rise early enough for our next Samoan adventure.

Today we had the choice of several morning excursions: a visit to Robert Louis Stevenson’s home, a meeting with island women at a community center, or snorkeling. I was torn between the last two (I know which one my wife Mary Jean would have picked), but I chose snorkeling. No regrets. Our rubber boats had to travel only a half a mile off the hotel beach to bring us to a beautiful coral reef. We were given some basic instruction, well watched over by our guides, 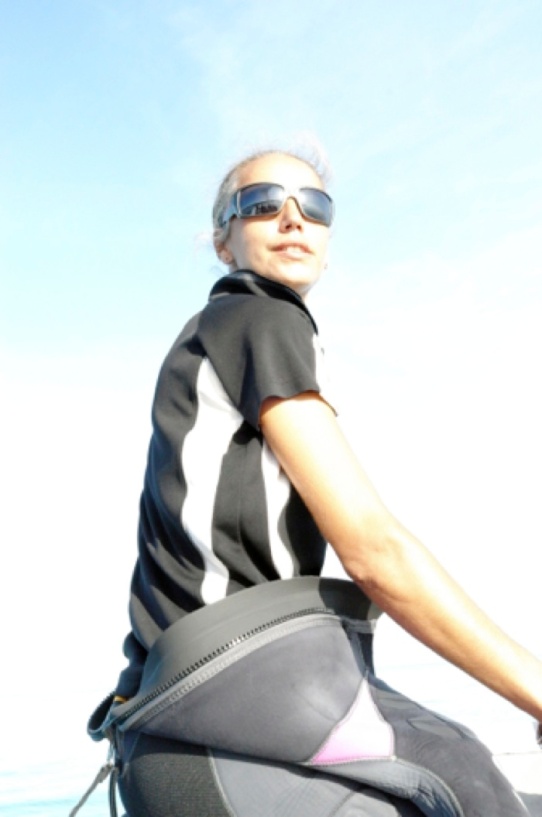 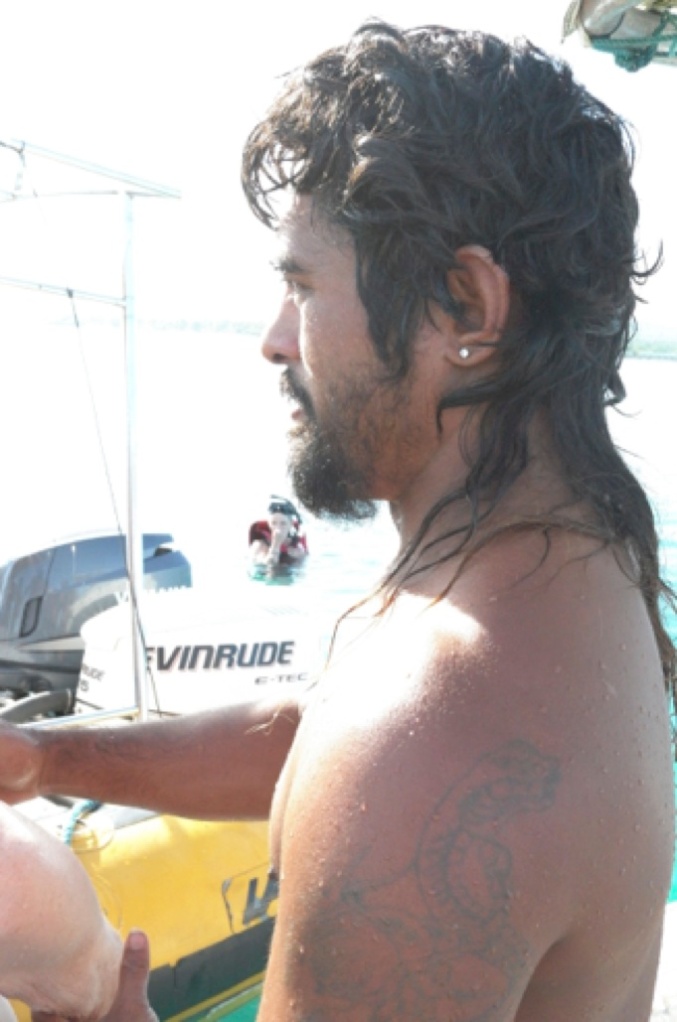 and spent an hour applying the information Fred Diehl gave us the day before. As the many brilliantly colored fish wove in and out of and grazed on the corals, one could clearly see how much the ecosystem depends on this nutrient source. Fred’s lecture about the massive global die off of corals (45%) was a wake up call. 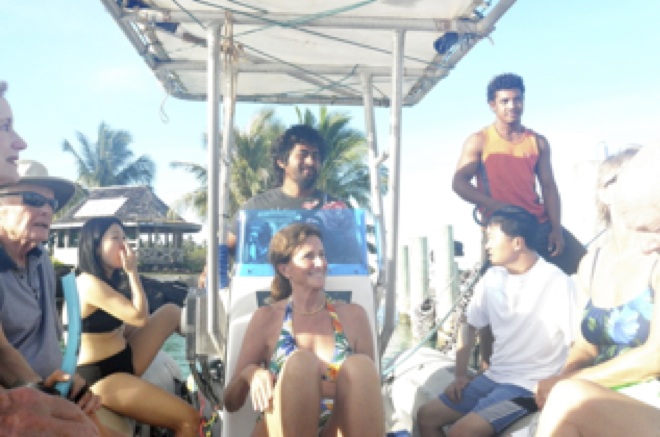 Getting off the dock on our return, I saw a large double-hulled canoe: a reconstruction of the type that Polynesian seafarers used to reach these remote islands. 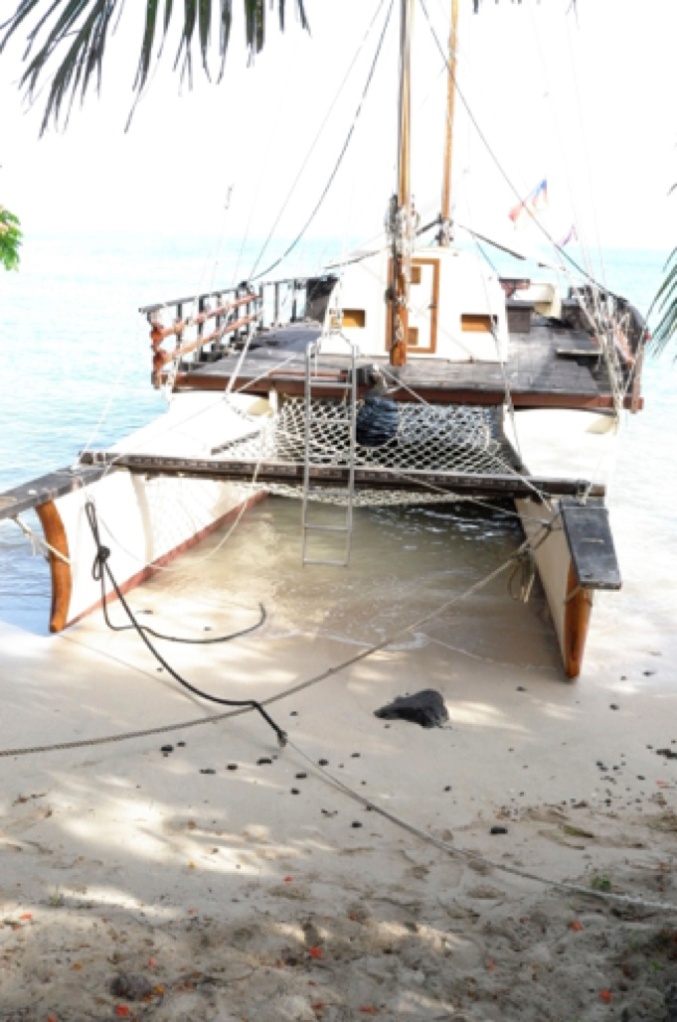 Climbing aboard, I was given a tour by one of its Samoan crew members.

He proudly listed all the places they have sailed to (from Hawaii to San Francisco and New Zealand). Next year, they have been invited to travel to Germany for an exposition. This will require them to motor through the Panama Canal using solar cells and a small electric motor. I wonder whether they will handle the Atlantic as masterfully as they have the Pacific.

Lunch was accompanied by Samoan music and dance, and then it was back to the plane for a 1:00 PM departure for Cairns, Australia.

This flight was again long (six and ½ hours) but we passed over some beautiful Pacific Islands. Here’s an iPhone image of one of the Fiji islands.

During our flight, Fred spoke, appropriately, on “Weird Animals” (monotremes and marsupials, all of which flourish in Australia), and Alan lectured on “The Australians.” His talk traced their amazing and early journey from Africa to Australia. He showed slides of some of the early art (circa over 40,000 years ago) indicating that this different branch of the human “rainbow” family in some cases appears to have culturally outpaced its African, Asian and European kin.

Landing in Cairns, and bussing to the holiday town of Port Douglas past acres of sugar cane fields, our day ended with a reception in the lobby of the Pullman Port Douglas (Sea Temple) Hotel, where we are staying for two nights. Lynn Garrison, our program director, told us to be on time in order to meet our “special guest.” Speculation ran wild: Nicole Kidman? Hugh Jackman? Even better. We were greeted by Koop:

Tomorrow, some of us are going to the Barrier Reef for a day of snorkeling, and the others for a walk in the Daintree Rain Forest. Stay tuned.